Government of the School 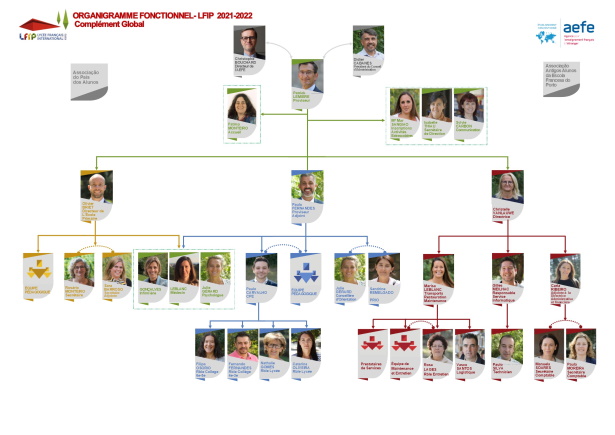 The Board of the LFIP

The Board of the LFIP has deliberative jurisdiction over the passing of internal regulations of the school and can give its opinion relative to, among other things, the development of the educational project, the organisation of the rythm of the school year and the establishment of the holiday calendar.

In addition, the Board of the LFIP can be consulted on all questions which concern the life of the school and is informed about the forecasts and financial management.

The five representatives of the parents are elected by voting for a list, in proportional representation and by the greatest margin.  Each list is composed of five appointees and five alternates, according to a preferential order, but with the possibility of presenting an incomplete list.  Of the groups of representatives, there will be two parents of students of the secondary school who will participate in the Secondary School Board, the authority of the Secondary School, which will be consulted quarterly, before the meeting of the Board of the LFIP.

Elections for the Board of the LFIP

Following the elections of the representatives on the School Council, the list of members is accessible on this page.

Internal regulations of the School Council

Minutes of the Meetings

This group prepares the works for the Board of the LFIP.

It gives its opinion on the running of the junior and senior schools, particularly about educational questions, such as the educational projects integrated to the School Plan, various educational matters, the organisation of the school calendar, the procedures for orientation...

A Primary School Board is established in each school which includes primary education under the responsibility of a school director.  The Board meets at least once per quarter to review and give its opinion on the educational structure, the school hours, the calendar, the school plan, the extracurricular activities, questions of hygiene, health, security, cafeteria, needs for learning materials, workshops for continuing education and innumerable matters, except for problems relating to teaching and the educational content taught by the professors, which is a matter reserved to the Inspectors of Educational Service of the AEFE.

Elections of  the representatives of  parents to the Primary School Board

The 15 representatives of the parents of students to the School Board (at least 1 for each level from Pre-School through Elementary School) are elected by voting for a list, in proportional representation and by the greatest margin.

Minutes of the Boards

The CESC is an authority which considers, observes and submits proposals, conceives, puts into practice and evaluates the educational projects underway regarding:

It is presided over by the Director of the LFIP or by his representative.

The CESC can take as associates to its work competent partners able to make a useful contribution to the educational and preventative policies of the school.

Minutes of the Commitee

The Disciplinary Board is derived from the School Board.  This body reviews any serious failures which will will give rise to a sanction greater than 8 days suspension and which exceed the authority of the Director of the School.

The head of the school presides over this commission composed of equal numbers of representatives of the administration and elected staff on the governing board, and the nurse.

Its mission is to analyze and promote the prevention of occupational risks; to propose actions to prevent harassment at work; to suggest any measure likely to improve hygiene, safety and working conditions, to propose hygiene and safety training actions in connection with the continuous training unit

This is composed of professors from each discipline who make proposals for teaching, taking into account the materials and the teaching plan.  The teaching staff meet as often as necessary, for evaluating the needs of each discipline, for working up the plans and coordinating policies.

The Educational Committee and Discipline Coordinators
The Form Committees

The Form Committees must not, in any case, evoke problems or situations which call into question students, parents, etc.  The members of the Committees have a duty of discretion.

The Form Committees are comprised of the following members:

This Committee meets at the end of every quarter.

Faced with suggestions for guidance, the Form Committee makes a proposal, but the final decision falls to the Director.  If the family is not in agreement with the decision taken, the Director can call them together for a meeting.  If they do not come to an agreement, the parents can appeal.

The Division Committees are the place for coordinating education centred on the student and orienting his work, based on three axes:

Every student, and especially those who might be in difficulties, should see his situation reviewed by the appropriate Division Committee.  This way, eventual actions for support, reinforcement or development can be decided.

Throughout the year and, clearly, considering the consent of the parents, the Division Committee can decide to accelerate the progress of the student or, on the other hand, keep him or her in the same division.  Obviously, this is a decision which should be considered throughout the year and which should take into account the results of specific actions put into practice.

The Teachers Committee is an internal body exclusively for the teachers.
The professors from the three school divisions meet regularly under the oversight of the Director in order to plan future educational activity and to ensure the coherence of the education offered at the LFIP.