An Academic Network Unique in the World

The AEFE (Agency for French Education Abroad), a public institution which is under the guidance of the Ministry of Foreign Affairs, leads and administers the network of French schools abroad, with the dual mission of not only ensuring the continuity of the public service of education for the French who live abroad, but also of contributing to the diffusion of French language and culture abroad. This academic network, unique in the world, is made up of 540 schools, which welcome over 365,000 students in 138 countries.  The consistent, high quality education delivered in these schools, together with the associated values, are the hallmarks of a network unique in the world for its breadth.

The education offered in the elementary, middle and secondary French schools abroad is innovative, open to the culture and language of the host country, and ensures a training reinforced by living languages beginning in pre-school. The students are prepared for the future, to be citizens and actors in open, polyglot and multi-cultural societies. The institutions which are part of this academic network aim to combine a French education and training of international standard, together with the promotion of the French language, the development of multi-linguism, a method which leads all the students to success, and a demand for excellence. The scholastic results confirm this excellence with a world-wide success rate on the Baccalaureat exam of 95%, of which 2/3 pass with distinction.

An Advantage For France

This academic organisation, present in practically all the countries and capitals of the world, is recognised as a fundamental agent of the French presence abroad. By virtue of gathering and training around 246,000 foreign (non-French) students, it continues to be crucial for the influence of our culture, our language and our values.  Additionally, the AEFE has contributed to the reinforcement of cooperative relations between the French and foreign educational systems, as well as participating actively in the promotion of French higher education, and above all functions as an encouragement to seek higher education in France. Finally, it is an advantage of the first order in the policy of helping the mobility of French communities and the development of international enterprises.

The Alumni, An Investment For The Future

The advantage of French schooling abroad continues within the network of former students who maintain ties of friendship and solidarity with all those who benefitted from this education. This network, estimated at 600,000 alumni, offers an important potential for influence, because many alumni of these schools, both French and foreign, of various generations, carry out, across the entire world, outstanding roles in the most varied domains: politics, economy, higher education, social communication and culture.  These personalities are the foremost ambassadors of our educational model and encourage a privileged tie to our culture and the french language.  Among these former students, a few examples of personalities:  Carlos Ghosn (Lebanon), Boutros Boutros-Ghali (Egypt), Ingrid Betancourt (Colombia), Jodie Foster (United States), Marjane Satrapi (Austria), Jonathan Littell (United States), Atiq Rahimi (Afghanistan) …

Statistics
Map of the Network 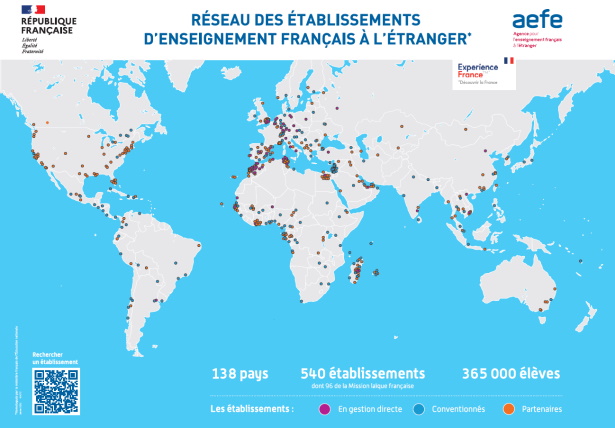