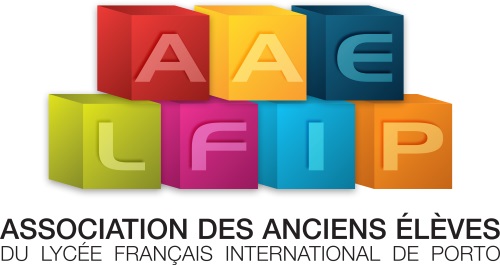 If you are not yet registered on the data base of Alumni, we encourage you to do that, through this site.  Please do not hesitate to speak with your old friends from the School to ask them to register too.

Afterwards, after sending the form, you can also send us a photograph, if you wish.

This data is used exclusively for the activities of the Lycee Français International de Porto and the Association of Alumni of the French School and Lycée Francais International de Porto (AAELFIP) and will not be shared with third parties, nor used for commercial purposes. The rights of access, of removal or modification are guaranteed by emailing to: webmaster@lfip.pt

Send us your photo

Association of Alumni of the French School

A AAELFIP (Association of Alumni of the French School and Lycée Francais International de Porto) was created by public deed on 21 May, 1993 in Porto.

This initiative resulted from the need to have an association of former students  represented for obtaining the authorisation essential to the founding of the Collège (Junior School).  At the beginning of 1993, the President of the Association of the French of the North of Portugal, Dr. Martine Rebello de Carvalho, contacted some former students, her acquaintances and friends, and presented the project to them – and thus was born a committee which was the origin of the present Association.

The AAELFIP organised, in that first year, the First Alumni Luncheon which took place at the School, always a very agreeable location to its associates, who took advantage of the event to look over “their” school. This first meeting was very well attended, since there were students, the oldest of whom had not seen one another for more than 30 years.

In the following years, five meetings were organised, but the turnout was reduced, since the associates began to organise events of their own, which is perfectly understandable. As a result the collective meeting did not have much reason for being.  In this way, the activity of the AAELFIPwas reduced to the collaboration it provided when the School requested, for example, help organising its 40 Years celebration.

At the School, in the care of the Directors, are documents including the constitution of the Association, its Statutes, and various documentation, together with an album of photographs and a book of signatures and comments relative to the First Alumni Luncheon.

Recently, with the objective of updating the mailing list which the Association used for the event “50 Years of the French School 1963-2013”, a Facebook page was created for an open group – Association of Alumni of the French School and Lycée Francais International de Porto.  There, you can consult the Statutes, the composition of the managing bodies and communicate with the members or receive information.

The form below can be used to update the registration of existing associates or for sign up of new members.

The Directors of the AAELFIP are available for any clarifications and help.

Composition of the Association